*Here’s an update two months after this article was published:

September 15-16 is marked as the most likely date for the Merge to happen.

Vitalik Buterin and many others are considering Ethereum Classic mining as a successful alternative for GPU miners once the Merge is completed.

The article below still provides useful insight on scenarios that may playout:

This is the ultimate guide to Ethereum Merge.

So if you want to:

This article will help you prepare for The Merge.

Let’s jump right into it.

Table of Contents hide
1 What is the merge and why would you care?
2 Ethereum merge date – who knows when?
3 Will Ethereum 2.0 be a new coin?
4 What will happen to crypto mining after the merge?
5 What else to mine after ETH?
5.1 What do I think will happen?
5.2 So what will be the coin to mine next?
6 Will mining be profitable after The Merge?

What is the merge and why would you care?

The Ethereum Merge(or simply “The Merge”) is approaching.

But what is The Merge?

Like most early cryptocurrencies, Ethereum was built on PoW(proof-of-work), which relies on miners to power and secure the blockchain.

Then in recent years, partly due to the large energy consumption of Bitcoin, we saw the invention of PoS(proof-of-stake).

With PoS, miners are erased from the equation, and all transactions and security on the blockchain are validated by those who stake Ethereum.

So why would you care?

Are miners done for good? I don’t think so. Read on to learn more and what you need to do once The Merge is completed.

Ethereum merge date – who knows when?

Ethereum is set on completing The Merge in 2022.

But will it really happen this year?

If you go to the official Ethereum Merge page, you will see that The Merge date isn’t as exact as you might expect it: 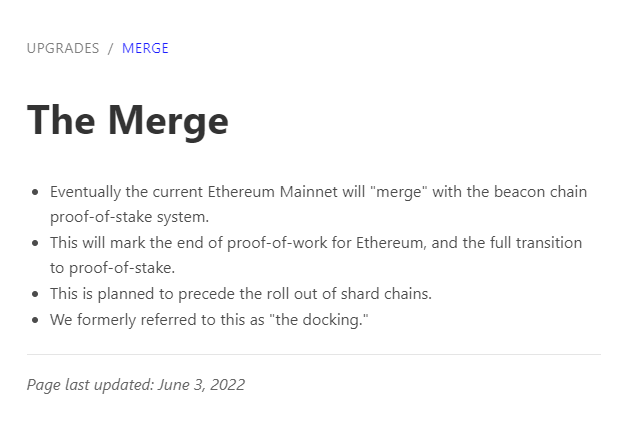 So, The Merge will happen eventually.

The truth is that PoS Ethereum is in talks since 2017, yet so far it hasn’t been pushed to production.

We had lots of “action” around ETH 2.0 last year, but it’s still only in plans.

However, the Ethereum devs seem more eager than ever, let’s see what happens if we see The Merge finally happening in 2022.

If and when the Ethereum Merge happens, it won’t change anything for those who hold or stake in Ethereum.

We are not going to see a new Ethereum coin nor the new blockchain that ETH operates on.

The change is set to upgrade the Ethereum network and how the blockchain is secured, but apart from that everything should stay the same.

In fact, and probably to avoid such confusion, the official stand of the Ethereum team is that there is no Ethereum 2.0.

So for them, Ethereum equals to Execution layer + Consensus layer. The only Ethereum will be Ethereum, no Ethereum 2.0.

But what will happen with miners?

What will happen to crypto mining after the merge?

The crypto mining after The Merge can be considered an inflection point.

Bitcoin mining with GPU isn’t profitable for a long time now and can be done successfully only with ASIC machines.

On this website, we learn how to mine Bitcoin with your GPU, but the truth is that we mine Ethereum and get paid in Bitcoin, Ethereum, cash, or some other cryptocurrency.

Why is this the case?

Due to the current price of Ethereum, ETH is the most profitable coin to be mined with GPU.

But once Ethereum moves to PoS, we will have millions of GPUs that won’t be able to mine ETH, thus will have to satisfy with mining of less profitable coins.

Many of them will go out of business, dropping the GPU pricing down.

Is this really how things are going to play out?

So first and foremost, we need to see if The Merge and the difficulty bomb will even be released this year.

If they do, things can play in various directions.

The Merge may prove problematic and force the developers to revert to PoW.

But if everything goes well, miners will need to find alternative coins to be mined.

What else to mine after ETH?

We will have too many miners that will have to satisfy with a pool of earnings that’s just a tiny fraction of what we earn at the moment.

I tend to disagree, and here’s why:

What do I think will happen?

I expect that miners’ influence will dictate a strong adoption of another cryptocurrency that wasn’t as popular so far.

If we see at least a basic consensus about what to mine next, the influx of millions of miners will naturally increase the adoption, popularity, and security of the new choice.

It’s that simple. And I believe the miners do have such power.

Imagine millions of miners starting to secure a blockchain that wasn’t as popular as before, asking on forums for instructions on how to do it, and talking to their families and friends about this new strong network, exchanging it on crypto exchanges, etc.

That’s exactly how Bitcoin and Ethereum raised in popularity, and I don’t see why a third option can’t emerge.

So what will be the coin to mine next?

If you take a look at current crypto and mining markets, Ethereum Classic, Firo, RavenCoin, and Sero seem some of the obvious choices.

But according to the table above, they represent just a tiny fraction of what miners currently earn with Ethereum mining.

So once the Ethereum mining is dead, if all miners move to those coins, the mining difficulty of their blockchains will rise heavily and miners will have to split the share among them.

In order to still be profitable, one of the four things will have to happen:

Will mining be profitable after The Merge?

This is a billion-dollar question that no one can answer at the moment.

We can think of it positively and say that new projects will emerge and cover the usage of miners’ GPUs.

We may even see a completely new way to use GPUs in order to mine Bitcoin or some other profitable cryptocurrency.

But short-term speaking, you should be prepared for the worst-case scenario.

Miners are people, after all, so no one can guarantee they’ll find a consensus quickly.

We could see a panic sell-off of mining equipment or even a complete abandonment of PoW.

If you are considering starting mining at this point, you may want to pause and wait to see how The Merge situation will play out.

If you are already in and believe in the miner’s power, communicate with your fellow miners more than ever.

I personally believe in the miner’s power. But short-term speaking, we could see lots of turbulence.

So that’s my ultimate guide to the Ethereum Merge.

Now it’s your turn: what do you think about this guide? Or is there something I forgot to include?