Bitcoin Mining Software: Home1 / Blog2 / Get into crypto through sports- Learn about Chiliz and Socios!

Get into crypto through sports- Learn about Chiliz and Socios!

I’ve already briefly written about Chiliz here, but a few months have passed and I feel like Chiliz and Socios need an article for themselves on this website.

So, without wasting time on unnecessary intros, let’s see what Chiliz and Socios are.

What are Chiliz and Socios?

Chiliz is the company behind the Chiliz blockchain platform, aiming at sports of all kinds and offering them a new way of interaction between teams and their fans.

Socios is a platform for sports fans, built on the Chiliz blockchain, and allows sports fans to buy or sell their fan tokens, trade them, use them to vote on their club’s pools, and claim discounts on club merchandise.

$CHZ is the native token used on the Chiliz Blockchain, and also used inside the Socios app. $CHZ is also the only token that can be used to buy newer fan tokens that can be bought via Socios only, long before those fan tokens appear on mainstream crypto exchanges like Binance.

The company started developing its ideas in 2016, but the first actual work happened at the beginning of 2018, after rising 66 million dollars through a Private Placement.

Then towards the end of the year, Chiliz distributed the $CHZ coin to their early investors, after which they got listed on Binance, BitMex, and KuCoin.

In December 2019, Chiliz released their Socios app, having the Juventus football club sign with them as the first club that offered their own fan token($JUV).

The rest of it is yet to unravel, but last year and a half were very lucrative for Socios and Chiliz.

Current partnerships of Chiliz and Socios and their fan tokens

Depending on your interests and likes, you may or may not realize the Chiliz potential yet, luckily for me I was interested in sports when I was younger, and when I saw the Chiliz partners, I knew it was going to be a huge success.

There is a HUGE amount of money in sports events like major European football leagues, European Champions League, the UEFA Cup, and so on.

And Chiliz being a partner with PSG, Barcelona, AC Milan, Atletico Madrid, Manchester City, and AC Roma clearly shows the signs of Chiliz being a company with the potential to rise to unseen heights.

Even if you don’t follow European soccer, you probably heard of teams and clubs listed above. And how wouldn’t you, when they exist for 50-100 years and are leading clubs in their soccer leagues, which again are top Europe and world soccer leagues.

Besides partnering with such amazing clubs, Chiliz also partnered with the PFL(professional fighters league), some of the world’s most prominent gaming teams, and is currently trying to enter the Formula 1 market!

That’s what I call ambition!

But truth to be spoken, if we think a bit more we can see that the Socios app and Chiliz are just starting!

They’ve made an app for sports fans, which can be scaled to fit most of the sports known to humans. In a few years from now, it’s not excluded that we will see Chiliz partnering with:

By now, you should hopefully see the potential, but does the market feels the same? 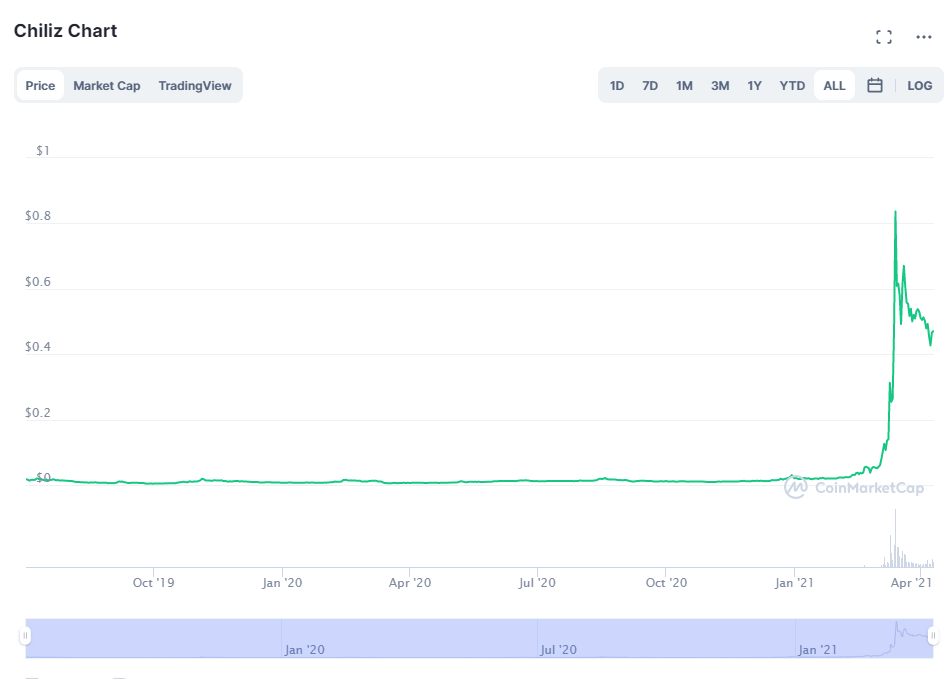 However, it was affected by the Covid-19 situation similar to all other crypto markets- at one point falling below half of a cent price($0.005).

And for months afterward, it traded slowly, while most people failed to see its huge potential.

The price didn’t move significantly for almost a year, at certain points hitting $0.02 and $0.03.

This was followed by a healthy correction to the current $CHZ price sitting near the $0.5 bar right now.

As I see it, the world is finally picking up, but luckily you still have an opportunity to enter before others.

Many coins have a solid purpose, but even those without them are trading well at the moment because the whole crypto market is in a large and long-lasting expansion.

However, $CHZ made a very strong move into top soccer clubs, and there are no signs they will slow down anytime sooner.

With Juventus only on their board, maybe people didn’t realize how big the Chiliz and Socios network is going to be.

But right now, with top leagues and major players entering, and with Formula 1 involvement on sight, this really feels like only a beginning!

Imagine what will happen when the word spreads enough, and when hundreds if not thousands of clubs from all over the world sign up with Socios and decide to offer their own fan token to the masses.

You should do your own research and get your own conclusions, but the only thing I see with $CHZ is lots and lots of money coming into their system.

Every new fan token is a pump of fresh money into the system, every fan token listing on mainstream exchanges usually makes that x5 or x10.

And most importantly, the more big players enter the Chiliz blockchain, the bigger the incentive for other top clubs to join and not leave their own fans behind.

What to do next?

Well, one more time I’d like to give you a disclaimer, as crypto trading and investing always comes with a certain dose of risk:

Never, never ever invest money you can’t afford to lose.

With that out of the way, I think it’s best to do your own research on Chiliz and see if you feel the same way as I do.

If you get the sense of what I’m talking about and would like to invest in CHZ or some of the fan tokens, you can do so in two simple ways:

If you don’t feel the same as I do about $CHZ, it’s probably best to just leave it as is and move forward :)

After all, you should follow your own gut and make your own investment decisions.

My intention with this article was to let the public know about what’s coming to the sports industry.

It is absolutely not my intention to persuade you into investing in something you don’t understand or have a strong feeling about.

Thus, do your own research and feel free to comment if you have any questions, comments, or thoughts ;)

A few months have passed since I wrote about Chiliz back in April, and I must say those months were interesting.

If we take a look at price action only, Chiliz is down to 0.25$, but a more in-depth look backs up my predictions about this project and Cryptocurrency.

Markets go up and down all the time, and when the whole cryptocurrency market crashed a bit in April, Chiliz followed.

Yet, what separates it from many other projects is the work during low market times.

Let’s see what Chiliz and Socios achieved since April 2021: