We must recognize something. Bitcoin, as time has passed, has become a purely speculative asset. This is because the price does not rise because there is a new advance in Bitcoin technology. The price rises thanks to the euphoria of people.

Being Bitcoin an intangible asset(something we cannot see or touch physically), makes it much harder to know what a good purchase price is.

Unlike precious metals such as gold, which is an asset that is very easy to know what a good purchase price is since with data such as grams of, for example, a gold coin, we can know if the price of the one being sold is appropriate.

On the contrary with Bitcoin, it is very difficult to know if it is at an overrated point because to know it, we would have to answer the following question.

So far, we do not know what kind of cryptocurrency news affects the price of Bitcoin, and we do not know if in the future we can pay with Bitcoin in some daily establishments.

According to what we have seen so far, Bitcoin price is based solely on people’s emotions.

That is why this asset respects less and less technical analysis.

So, we are going to use other parameters to carry out our predictions for the next year, 2020.

Trace Mayer was the first blogger to recommend blockchain technology to invest in.

This he did when the market cap was below 2 million dollars.

He undoubtedly was one of the pioneers in the world of Bitcoin, which recommended it since it was trading at $ 0.25.

He based his prediction on his so-called “Multiple Mayer,” which is a 200-day moving average, based on the price of Bitcoin. 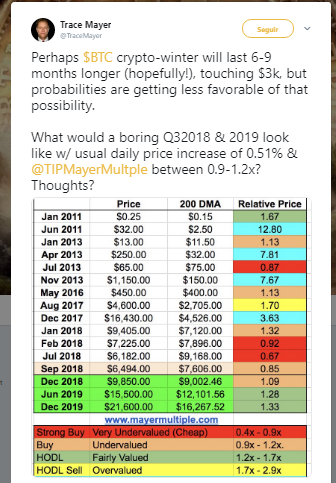 He is a former Wall Street veteran.

He worked for many years as a broker, more specifically in Paine Webber.

Similar to Trace Mayer, he started recommending Bitcoin from the beginning, being his initial recommendation when this cryptocurrency was around 3 dollars.

The controversial driver of the Keiser Report program of RT predicted on August 4, 2019, that he believes Bitcoin could soon cross the $ 15,000.

Although, he didn’t mention what he based his prediction on.

As we have spoken, he most likely knows what is behind the financial markets, and knows the psychology of investors much better than we, the small traders.

During the second quarter of the current year, we had a Bitcoin prediction from Anthony Pompliano. He had already made many accurate predictions such as August 2018, when the price of BTC was at USD 6,770.

This time, the prediction was the price could fall to USD 3,000, before rebounding to higher values.

He mentioned a deadline of December 31, 2021, for the price of Bitcoin to reach USD 100 thousand.

This was a comment he made about his 2018 prediction:

“This prediction of a 50% drop in the price of Bitcoin, was received with much scepticism, but finally proved to be accurate. Bitcoin proceeded to fall below USD 3,200 in December 2018, before recovering and skyrocketing beyond a price of USD 10,000 ”

Then, after he remembered how accurate his prediction was, he reaffirmed his position that Bitcoin will reach $ 100,000.

Naeem Aslam is also an analyst, specifically in ThinkMarkets.

The Argentine analyst assured that they have questioned him excessively about his position, more now, that the BTC is on the rise.

In response to all these requests, he advised all traders that they should not follow the investment strategy of others.

He said that most traders have a footfall to stay out of operation.

He strongly advises that traders are not afraid of being left out during an uptrend, as this can lead them to make very hasty decisions.

The co-founder and director of Fundstrat Global Advisors believe that the fair value of Bitcoin is around $ 14,000.

And while it is true that this prediction was achieved in the middle of this year, the BTC failed to hold for a long time, so Lee strongly believes that the BTC will have a fairly considerable price increase.

Recently, he said the price of Bitcoin will reach $ 91,000 in March 2020. Lee based his prediction according to an average of the percentage earned after each fall to reach that figure in 2020.

John McAfee is the founder of McAfee Associates, which launched one of the first antiviruses we know today.

He also founded MGT Capital, a company dedicated to the extraction of cryptocurrencies.

McAffee got involved with Bitcoin because, according to him, it could be transformed into a kind of a “standard currency” worldwide.

During the euphoria of highs in the crypto market of 2017, McAfee tweeted:

His reason for believing this is based on the fact that the shortage of Bitcoin will increase its value considerably.

However, so far, the price of the BTC shows no signs that it has taken much strength, so it is possible that in the future we will see John explaining why the BTC did not reach the million dollars.

He explains that the euphoria and current market behavior can make a revaluation of 3,500%, which means arrival at $ 330,000.

As we have been able to read throughout this article, specialists and analysts are making predictions ranging from USD 400,000 to one million dollars per BTC.

However, Faust believes that a rebound to this figure would be crazy.

But, in the long term, he considers it feasible for the BTC to reach values of many thousands of dollars, yet that is a matter of waiting and that people learn to take advantage of Bitcoin.

Also, in Brazil, the founder of Nox Bitcoin, João Paulo Oliveira, believes that bitcoin is a quite feasible investment.

“I think this can be a revolutionary infrastructure, which can inject even more money into the economy.”

The number of Bitcoin investors and traders continues to increase in Brazil. The Brazilian legislature is expected to approve a comprehensive Bitcoin law, to legalize the use of this asset within the country.

Bitcoin vs Ethereum – What’s the difference?

The History Of Bitcoin
Scroll to top