But there is a second reason for this, and it’s an even bigger one. It’s also the reason why some Bitcoin mining software developers don’t really care about Windows 32-bit support. Windows 7 32-bit has a limitation of 4GB of RAM to use. And that’s it. If you have more than 4GB of RAM, Windows 32-bit simply won’t see it.

Some miners may argue that more than 4GB of RAM is needed only if you don’t know how to set up virtual memory. But RAM is always faster, plus it has become cheap. I believe a minimum of 8GB of RAM should be in your PC when mining on Windows, especially if you’re running a higher number of GPUs, and/or plan on using your PC while mining.

Each version of Windows 64-bit comes with at least 8GB RAM support, but if you’re interested in how RAM support rises with Windows 7 versions, you can take a look here.

Bitcoin mining software for Windows 7 64-bit comes in many forms, and I like it simple. No consoles, no config files, no tedious setup, and troubleshooting. If Bitcoin is going to get adopted, we need user-friendly mining software. With a GUI and simplicity to install and use, preferably within minutes.

I know you’re excited, so I’ll get to the point:

WinMiner is gone, NiceHash got hacked. So I had to find alternatives for hassle-free mining on Windows. And I found plenty of them :)

Kryptex is a tool that I first found after the NiceHash hack. At that time, it had a few alternatives, like WinMiner, Computta, and MinerGate. It beat them all, at least from my perspective.

Like every other mining software on this page, it comes with a clean and easy-to-use interface and takes only minutes to set up.

But I like it the most, as it gives me the most profit, and I’m using it for around 1.5 years- hassle-free.

In other words, Kryptex is a tool that I’m most experienced with, plus they never disappointed me. Having stable and profitable mining software that’s here to stay is a big thing. And over time I learned they pay every time, and their software works all the time.

If you never tried Kryptex, definitely give it a go and you may end up using it as well.

Cudo Miner is the second mining software that I recommend to anyone interested in Bitcoin mining on Windows 7.

It’s still relatively new, and I started testing it while in beta. Yet, it works really well over a wide range of operating systems, and mining with this software was nothing but a success for me.

Their software is now stable and working for most people out there, and what they currently have in beta is an actual mining operating system. CudoOS aims to make mining even simpler and more efficient, and it’s clear that the company has long-term plans when it comes to Bitcoin mining.

It’s also the only GUI mining tool that comes with versions for Windows, Mac, Linux and has its own OS in beta. Anything except the Windows version may not be of your interest, yet it does speak about how dedicated this company really is. 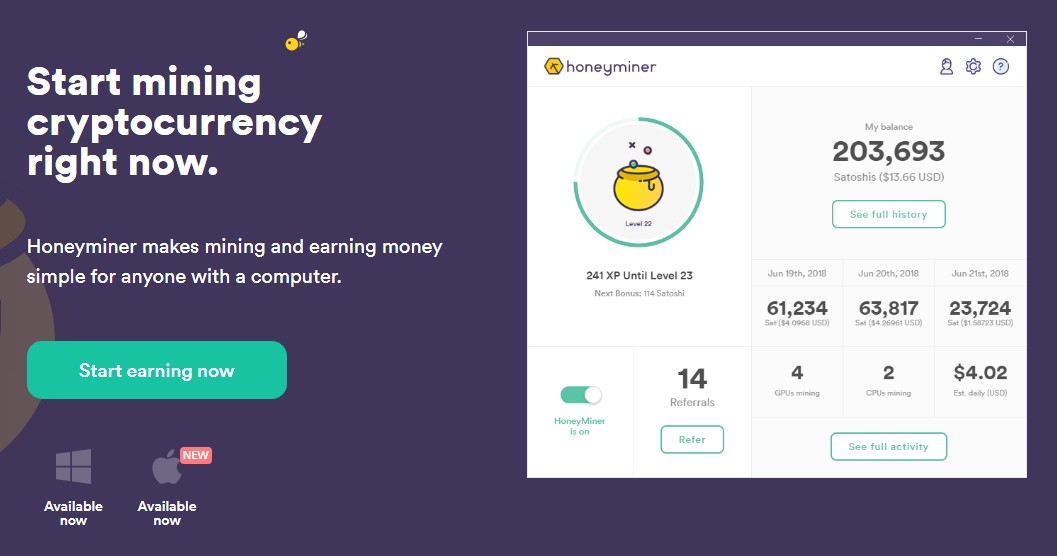 Honey Miner is a tool that doesn’t yield as much for me as the first two. But besides the profitability which is slightly lower, and depends on the hardware you use- it’s a lovely tool. Extremely easy to set up and use, this tool has great potential.

Right now, this app is available on Windows and Mac, and they have plans for releasing a Linux version. It comes with a very nice and colorful GUI and has a 2-tier referral system.

The only reason why I placed it third on my list is that the first two are earning slightly more on my mining rig, plus I didn’t use it as much as the first two.

If you’re on Windows or Mac- be sure to test it out and see how it works for you.

The first 3 mining tools listed above are the ones I heavily used and tested. Plus, my experience with them was pretty good.

The list above is the list I can vouch with my whole soul, while the list below is great and tested by me, yet it doesn’t work as good for me at the moment, and I don’t like it as much as the tools above:

Still, the bottom list may prove much better for you than using a console miner, especially if you’re new in the mining world.

After all, each of the tools from the bottom list also comes with a GUI, works on Windows 7 64-bit, and is easy to install and manage.

Bitcoin mining on Windows 7 vs Windows 10

Bitcoin mining on Windows 7 is definitely possible, especially on the 64-bit version. Yet, it wouldn’t be fair to conclude this article without saying a few words on the future perspective of mining with Windows 7.

The Windows 7 end of life is a known date- January 14, 2020. On this date, Microsoft will stop providing updates and support for all versions of Windows 7.

While this doesn’t automatically mean you won’t be able to mine on Windows 7 in ~7 months, it does mean mining on Windows 7 will be less secure in less than a year from now. Without further patches, Windows 7 will start becoming more and more vulnerable, until it becomes truly outdated at some point.

With this in mind, it makes sense to conclude that hardware giants will follow Microsoft and stop releasing new drivers for Windows 7.

And with all of the above in mind- you should understand that an upgrade from Windows 7 to Windows 10 will be a logical step in nourishing your mining operation.

Luckily for you, most licenses can upgrade directly from Windows 7 to Windows 10, and all of the mining tools listed here work equally well or better on Windows 10.

What to do next

Take your time and test all of the mining tools for Windows 7 64-bit that I’m featuring. What works for me may work slightly differently for you, especially when it comes to hardware and algorithms available.

Spending some time and testing various software on your Windows 7 machine will affect your mining business in the most positive way- it will help you choose the best solution for your own combination of hardware and operating system.

Bitcoin Mining Software on Windows 10 for 2021
Scroll to top